Buy one of the stunning apartments at Profile and make the most of $35,000 worth of incentives

The stunning top 2 levels of Profile are now selling – boasting breathtaking views across Malvern East, towards the Melbourne city skyline. A boutique series of only twenty individually designed residences, each home has been considered to the highest degree, enhancing the lives that play out within.

Construction is underway at Profile, and buyers can secure one of these thoughtfully crafted homes with as little as a 5% deposit. This is the developers exclusive, final release – and with up to $35,000* in incentives available to eligible buyers, there has never been a better time to buy.

The designers of Profile have utilised their years of industry expertise to inject the most coveted aspects of the Melbourne lifestyle into the stunning collection of homes at Profile. Featuring highly tailored and timelessly sophisticated spaces, apartments at Profile epitomise the best in contemporary, minimalist design. While the palette is muted and elegantly understated, absolutely no compromises have been made when it comes to quality and opulence – with every apartment including the very best appliances and finest quality fittings and finishes.

Profile takes inspiration from the character-filled heritage homes that surround it, dotted throughout the coveted domain of Malvern East. One of Melbourne’s most highly regarded inner-suburbs, Malvern East offers an enviable lifestyle – filled with high-end retailers, a number of award-winning eateries, and the best local amenities.

Profile‘s exterior presents a sophisticated composition, appointed with generous glazing, brass-like metal and a glass balustrade that wraps around the periphery of the building. Planters have also been incorporated in honour of Malvern East’s verdant landscape, surrounded by tranquil parks, gardens and walking paths. The facade embraces a vertical texture, employed to contrast with the horizontal bands, creating a solid distinction between two fundamental elements.

Profile is a stone’s throw from some of the best schools in the city, showcasing why the demand for housing in tightly-held Malvern East is so high. Life at Profile is your gateway to the best of Melbourne living, thanks to the convenience of being close to the CBD, with direct access to an abundance of public transport options, as well as a number of Melbourne’s key motorways.

The proximity to the Melbourne city-centre is contrasted by the privacy and tranquility found at Profile, and the expert team behind the design have drawn upon the context of historic Malvern East, delving into the suburb’s residential character to inform the project’s foundations and create a collection of homes that act as on oasis amongst the buzzing life of the inner-suburbs. 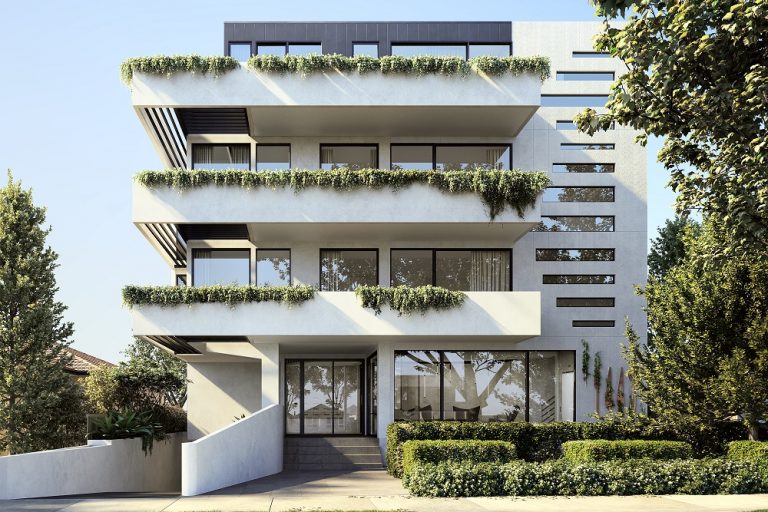